The law firm of Casper & de Toledo is committed to representing the best interests of its Connecticut clients suffering from the devastating effects of a traumatic brain injury (TBI). We offer a history of dedication, experience, and success in helping to ensure they find justice through the legal system. Whether you or a family member have suffered a severe head injury or mild TBI (also known as a concussion) due to an auto crash, fall, medical mistake, poisoning, or other cause, our legal team is skilled at addressing mild to severe cases of traumatic brain injury. Contact Casper & de Toledo for a free initial consultation with an experienced Connecticut brain injury lawyer to learn more about the most common traumatic brain injury causes and how we can help if you’ve been hurt by another party’s negligence.

Brain injury can be caused by mechanical force being applied to the brain that then causes the brain to accelerate and decelerate within the skull. The mechanical force can result from an actual blow to the head or from an acceleration/deceleration motion like a whiplash in a rear-end car accident. The event may, but need not, result in a loss of consciousness or even an altered state of consciousness.

Objective testing in a hospital setting may also reveal other causes. However, often when patients are evaluated in Connecticut hospital settings, their exams (such as physical exams, neurological, including mini-mental status– exams, x-rays, and even CT SCANs) are reported as normal.

If you believe that you or a loved one has suffered a traumatic brain injury, the lawyers of Connecticut’s Casper & de Toledo can help you seek more effective examinations.

Brain injury can also occur as a result of birth trauma through the negligence of an obstetrician, midwife, nurse, or other hospital staff. When a baby is deprived of oxygen, severe brain damage may result. This can occur because a baby is not delivered by a timely Cesarean section in the face of distress that either was known or should have been identified had the appropriate standard of care been followed. This is often referred to as a hypoxic injury or a hypoxic brain injury. Serious infant injuries of this type may lead to seizures, developmental disorders, or cerebral palsy, with a life-long emotional and economic impact on an entire family.

It is not necessary to strike your head to suffer a traumatic brain injury. Many motor vehicle impacts that cause vigorous shaking of the head and neck, such as rear-end collisions that cause a whiplash-type of injury, may be sufficient to cause the brain to be shaken within the skull. This results in damage to brain tissue as the brain bounces against the bony ridges that are particularly identifiable in the area of the frontal lobes of the brain.

Regardless of whether or not striking of the head has occurred, the resulting damage may be referred to as a diffuse axonal shearing or focal axonal injury, which can be responsible for disrupting the pathways within the brain. Even stretching of the axonal fibers constitutes brain injury.

Brain Injury Is Not Just an Event; It Is an Evolving Process

There is a common misconception that a traumatic brain injury occurs only at the time of an accident. That is not the case. We know that the force of blunt trauma to the head or sudden shaking of the head in a vehicle crash can produce damage to the neural structures within the brain. This damage can stem from direct contact of the brain parenchyma with the skull, or from rotational forces that strain structures including axons (wire-like structures). Following this type of cellular injury, there are secondary neurochemical and neurometabolic changes that follow with the release of substances that are toxic to otherwise healthy brain cells. Like any other tissue, once there is an injury to brain cells, the body responds with the release of chemicals, enzymes, immunoregulatory proteins, and amino acids within the brain. Some of these responses are neuro-protective, inasmuch as they attempt to heal and protect the involved cells. Some of the responses are neuro-destructive, not only to the injured cells but also to the adjoining cells. Some changes create an imbalance and can cause cellular damage and destruction that progresses over time. In turn, the enhanced damage can cause increasing cognitive deficits that make a patient’s condition worse. This is not a recently discovered phenomenon; it was documented in the 1990s and was reported in the National Institute of Health’s Consensus Statement on Rehabilitation of Persons with Traumatic Brain Injury.

In addition to bleeding that may result in a subdural or epidural hematoma, the injured brain may experience a hemisphere shift, indicating swelling or edema reflecting injury. In the context of brain injury, even without gross hemorrhage identifiable on standard clinical neuroimaging, the brain may experience subtle microscopic bleeding that follows damage to small vessels caught in the confluence of traumatic movement that results from the mechanical injury. Regardless of the source or the severity of the injury, breach of the blood-brain barrier is toxic to otherwise healthy brain tissue.

Over the last fifty years, scientists have come to understand more and more about the way the brain works and how it responds to injury. In the late 1970s, the science of brain injury seemed to be revolutionized with the invention of the CT scan and MRI and recognition that brain damage could occur when the neurons and axons were damaged. Importantly, it became generally accepted in the brain injury field that trauma could cause microscopic injury to multiple axons – the parts of brain cells that transmit signals.

Unfortunately, while these discoveries provide a far greater understanding of traumatic brain injury, they presage bad news. The changes in the brain that remain in response to the cascading damage are harbingers of increased risk to dementing illness, particularly for anyone with a preexisting susceptibility to Alzheimer’s Disease and Parkinson’s Disease. Such an increased risk is an area that may be the subject of compensation.

In cases involving subtle brain injury, mild traumatic brain injury, or post-concussion syndrome, the battle in making a fair recovery for the injured patient often boils down to satisfying an insurance company or a jury. This involves demonstrating scientifically that it is normal for symptoms to worsen over time. The secondary changes (including the neurometabolic cascade, neuroinflammation, cell death, glymphatic clearing) are often combined with the effects of cognitive changes and consequent psychological changes as well as behavioral changes, and patients and families often struggle to cope with lives that seem like they will never be the same. This is all normal following a traumatic brain injury. As you can see, the subject matter is complicated and should be entrusted to an experienced Connecticut brain injury lawyer.

Another Cause: Brain Toxicity Including Lead Poisoning

The most common type of toxic exposure that we see in our Stamford, Connecticut brain injury practice is lead paint poisoning. Often the result of economically deprived families living in older homes or poorly maintained homes (usually rentals), young children are exposed to paint dust and/or paint chips that are ingested, but sometimes, the exposure occurs in whole or in part in utero because the mother is exposed to lead dust during pregnancy.

Old paint contains lead, which once ingested by eating or breathing, gets into the bloodstream and damages the brain. Further, deteriorated paint conditions cause exposure from lead dust in the air and on surfaces. It has been widely accepted since 1991 that lead levels of 10 µg/dL (micrograms per deciliter) can cause brain injury in children; however, a study published in the November 5, 2007 issue of the journal Pediatrics confirms the long-held suspicion that blood lead levels substantially below 10 µg/dL can cause serious neurological problems.

Depending upon the severity of the lead poisoning, different treatments will be prescribed to reduce the child’s lead level, but the damage may already be done. The organ most vulnerable to lead poisoning is the brain. A young child who experiences lead poisoning may develop a variety of neurological disorders including attention deficit disorder (“ADD”); attention deficit hyperactivity disorder (“ADHD”); behavioral problems; and delayed motor, speech, or other functions. The child may also experience cognitive deficits that can be identified through neuropsychological testing, but sometimes, the child is too young to be tested.

Casper & de Toledo has a distinguished record of successful advocacy on behalf of families whose children have suffered severe brain damage resulting from lead poisoning. Like in cases of traumatic brain injury, brain damage from lead poisoning can have far-reaching implications for the child’s quality of life in the areas of education, employment, cognition, behavior, and the ability to care for oneself. Properly evaluated and prepared, a lead poisoning case might justify several million dollars in damages.

We Have the Background to Assist You

Our brain injury attorneys are members of a select group of nationwide lawyers attending advanced seminars on TBI specifics for lawyers, such as medicine, brain imaging, neuropsychology, life care planning, and more. Partner Stewart Casper has attended these programs and has also taught at these advanced traumatic brain injury programs. No other Connecticut law firm handling brain injury cases resulting from car crashes, falls, and other accidents has our background.

Visit our other pages on TBI, its diagnosis, and the other areas of law that we practice. If you or a family member has suffered the loss of consciousness (LOC), post-traumatic amnesia (PTA), or other physical, cognitive, or behavioral abnormalities after a serious injury accident, contact our Connecticut brain injury lawyers for a consultation regarding your legal options. 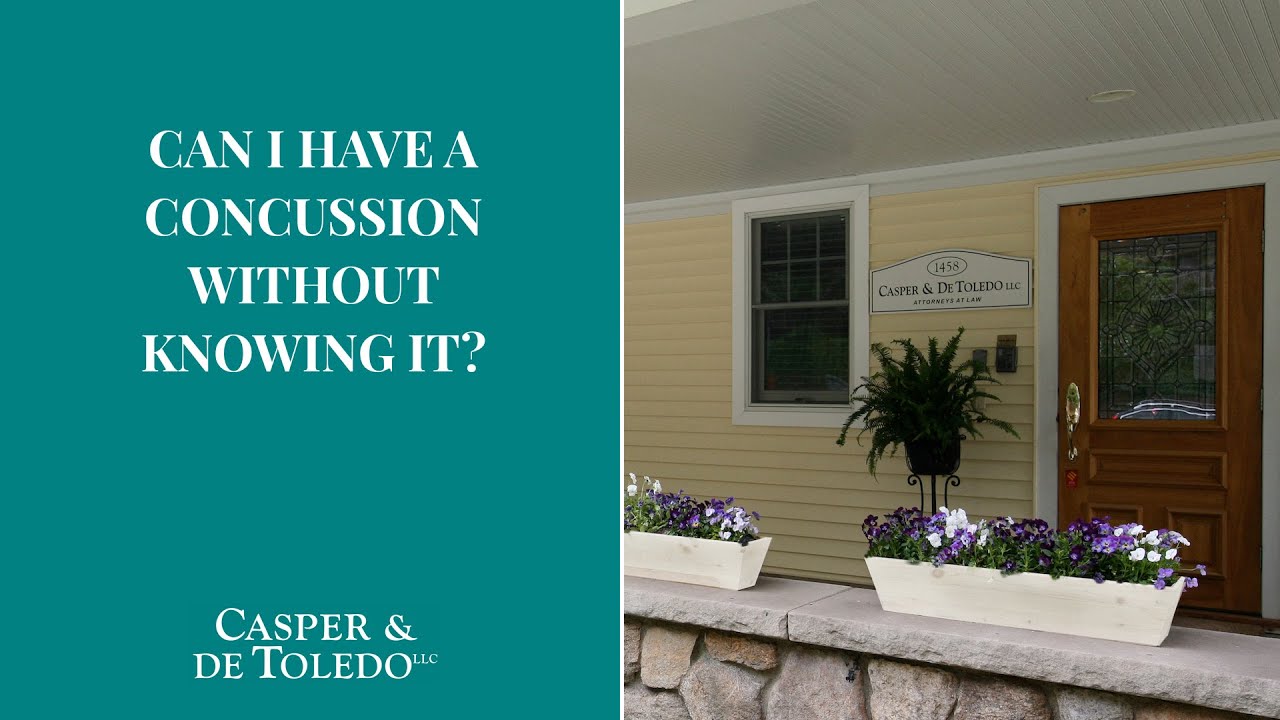