Slip and fall accidents are among the most common causes of serious injuries here in Connecticut. If you were injured in such an accident because of a property owner’s failure to keep his or her premises safe, you should contact a Stamford, Connecticut slip and fall lawyer from Casper & de Toledo.

When a person slips or trips and falls on someone else’s property due to hazardous conditions, the resulting injury is known as a slip and fall. These injuries are often caused by conditions such as:

Our experienced slip and fall attorneys will be able to instruct you as to what information is needed, including photos of the scene and the dangerous condition, witness information, and proof of injuries. If we deem it to be necessary to your case, we will bring in an expert who can testify about the hazardous nature of the property in question.

It is all a question of getting the facts and making a determination about the extent to which, if any, fault on the part of the plaintiff should factor in. It is interesting the way that it is done; there is no magic formula. Sometimes, it is just a compromise or a gut reaction on the part of the jurors as to whether someone who has slipped and fallen or tripped and fallen was at fault or not.

For example, Attorney Stewart Casper had a slip and fall case in a supermarket that was caught on videotape. The videotape showed that the client slipped on wetness on her first step inside the door. There was not much of an opportunity for her to have seen what was going on to the extent that the defense argued that there was comparative negligence. That part of their claim was a nonstarter, at least from the attorney’s perspective.

Another example of a case that was neither really a slip and fall nor a trip and fall, but was just a fall on a set of stairs in a building, occurred on a set of stairs going from the top floor up to a roof garden. The defendant had been on those stairs previously but was unable to maneuver on them safely in these particular circumstances. There was a percentage of negligence that was attributed to her, around 20% to 30%; that was a gut reaction that the jury came up with based on the circumstances.

In many instances, there is no objective basis for measuring a percentage of faults. It is a gut reaction that the law permits jurors to do, and you have to look at those factors.

In any case involving a slip and fall or a trip and fall, clients are advised to expect that, in any resolution of the case, they will be held accountable for some percentage of comparative negligence. As long as they are not more than 50% responsible, they can make a recovery. Their total recovery under Connecticut law is reduced by the percentage that they are found at fault. In many cases, most people think they do not have any responsibility at all. Everyone has at least some exposure to being found at fault, and people should be prepared so they are not caught by surprise later on.

Who is Responsible for a Sidewalk Accident in Connecticut?

Different municipalities have different rules, and in the absence of a municipal rule, at least in Connecticut, that obligation either rests on the municipality or on the state, depending on exactly where it is. The first thing to know about sidewalks is that sidewalks and roadways fall into the same category. Special statutory notice has to be served on the town clerk or the city clerk, or alternatively on the commissioner of transportation if it is state-owned, within ninety days of the injury. Failure to do that will result in a person losing a claim.

If you fall on a sidewalk, you need to meet that statutory obligation within ninety days, and if you do not, then forget about it. You also need to be able to prove all the things in every other type of trip and fall or slip and fall case. Some of these things that need to be proven are where did it happen— location; what it did look like; was there a crack in the sidewalk; was there a change in elevations within the sidewalk. There are a number of different things to look at, and if you do not get that notice done, you lose.

Health and Safety Are #1

Remember, your health and safety are paramount. If you slip and fall and are injured, do not wait to see if you feel better before seeking medical treatment. Any delay in proper treatment may result in a lasting chronic injury.

Traumatic brain injuries are common after serious slip and fall accidents. Unfortunately, these injuries can impact a person for years, or even permanently. Casper & de Toledo has decades of experience handling claims involving TBIs. You can trust a Connecticut brain injury lawyer from our firm to fight for you.

If you have been injured on another person’s property, or that of a business, your first action, after attending to your injuries, should be to contact the experienced premises liability lawyers at Casper & de Toledo in Stamford, Connecticut. 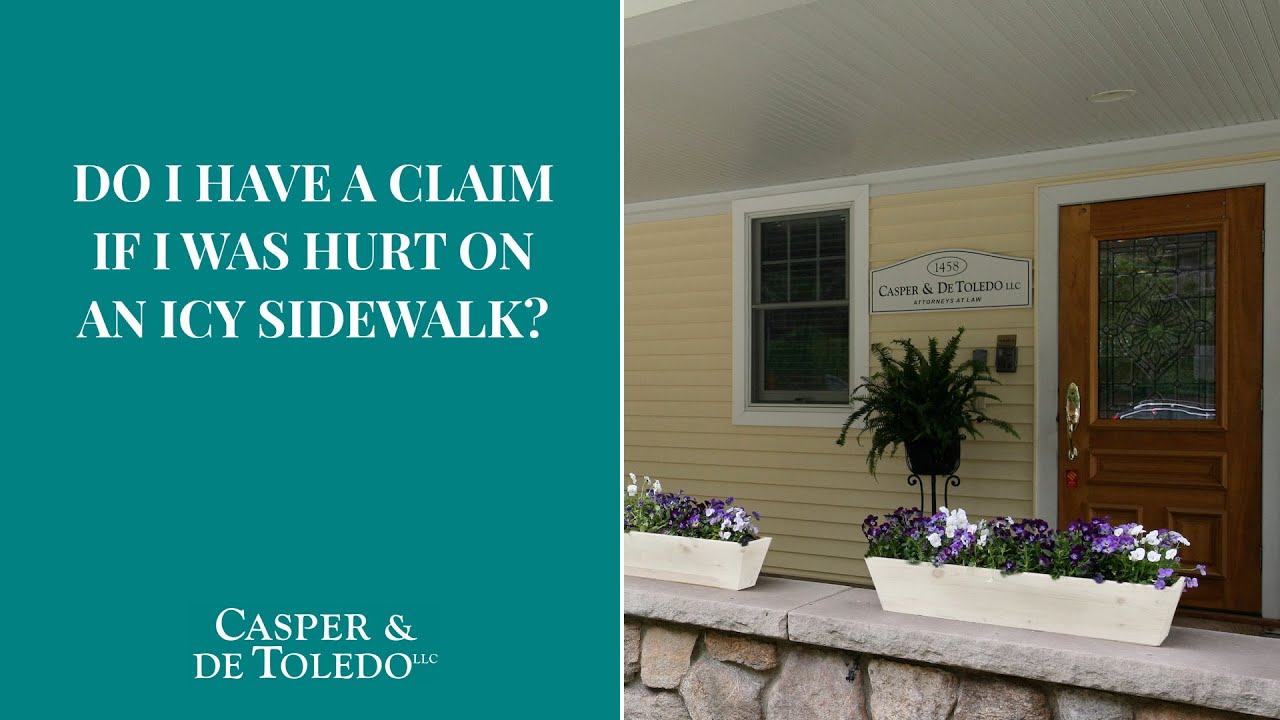